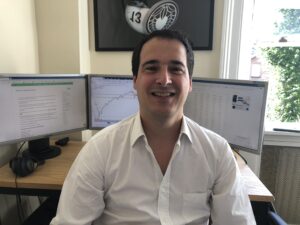 I am a Professional Trader and Portfolio Manager with almost 20 years’ experience.

I started in 2000 in Paris as a Cash Equity Trader then as a Fund Manager at Pierre Charron Gestion and DTAM.

In 2004, I joined Griffin Capital Management in London as a European Fund Manager for their long only fund and later on their long/short fund. At its peak, the Griffin Western European Team was managing more than $500m with Griffin Capital managing around $3bn overall. I was focusing on a multi-disciplinary systematic approach including fundamentals, technicals, price action trading and correlation hedging. I was regulated by the FCA:

From 2009 to 2018, I was a Proprietary Trader in London at Infinity Capital Markets. ICM is the European business of First New York, one of the leading Principal Trading Firms in the United States. ICM was non regulated as there was only Partner Money.

Over those years, I have built a large expertise across assets and markets.

From 2014 to 2017, I was a Senior Mentor at the Institute of Trading and Portfolio Management of Anton Kreil where I mentored students and took part in several conferences on trading and investing:

“Gregoire is a true Traders’ Trader, and possesses the rare combination of having a very consistent track record with the ability to communicate and express great ideas and tutoring.”

In October 2019, I launched the 4x4 Video Series to help Investors profitably manage their portfolios.