With Brexit looming, the U.K. is facing a very busy start of the year and 2019 overall.

Next week, Theresa May will try to get the backing for a deal agreed with the E.U.

To make it short (if that is possible):

– If the vote goes through, then it will be pass into law then the E.U. ratifies it and on the 29th of March we have Brexit Day.

– On the contrary, it the vote does not go through, then might have delays, new plan, new coming back and forth with the E.U….

Anyhow it is getting closer by the day. Here I am not taking position for or against Brexit but rather looking at facts and how/where to generate trading ideas.

First, a quick look at the ETFs performance since the Brexit vote: 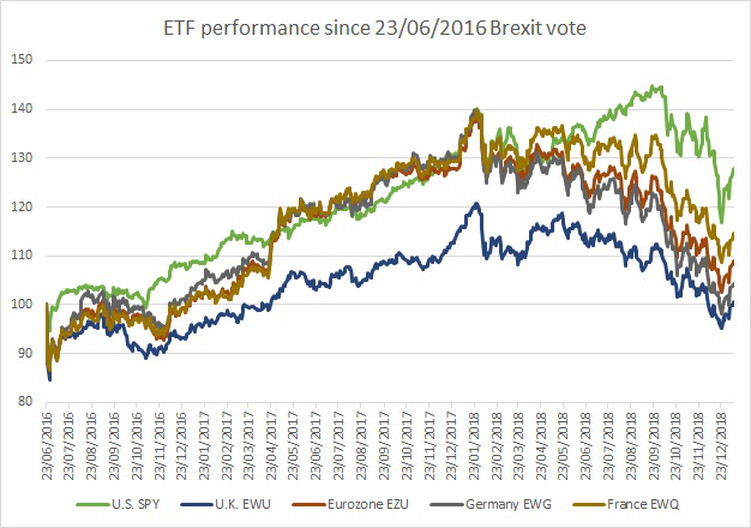 Now, let’s look at Trades between the E.U. and the U.K. since the launch of the euro: 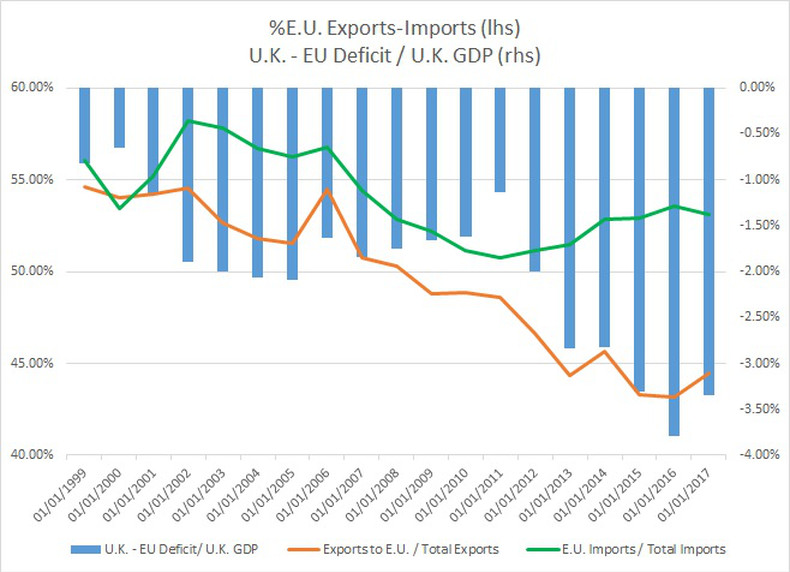 => Trade deficit with Europe getting larger.

As mentioned by different economists, one of the big reasons for the U.K. current account deterioration with the E.U. might be that the European single market is mostly a free trade area for goods. As services represent almost 80% of the U.K. GDP (vs ~70% for Germany), the U.K. was not the first beneficiary of the single market.

What about trades in goods and services with the different European Countries? Who is on the hook for big disruptions from Brexit based on trade balance?

Top 5 countries with who the U.K. is running a trade deficit:

No news here: Germany has more to lose.

There are some caveats with Spain as out of the 900k British Citizens living in the E.U., 1/3 live in Spain.

Same can be said for the Netherlands and Belgium with the “Rotterdam effect” as exports are recorded as going to their 1rst destination – so numbers can be distorted by this.

Exports of goods to the U.K by country as % of GDP: 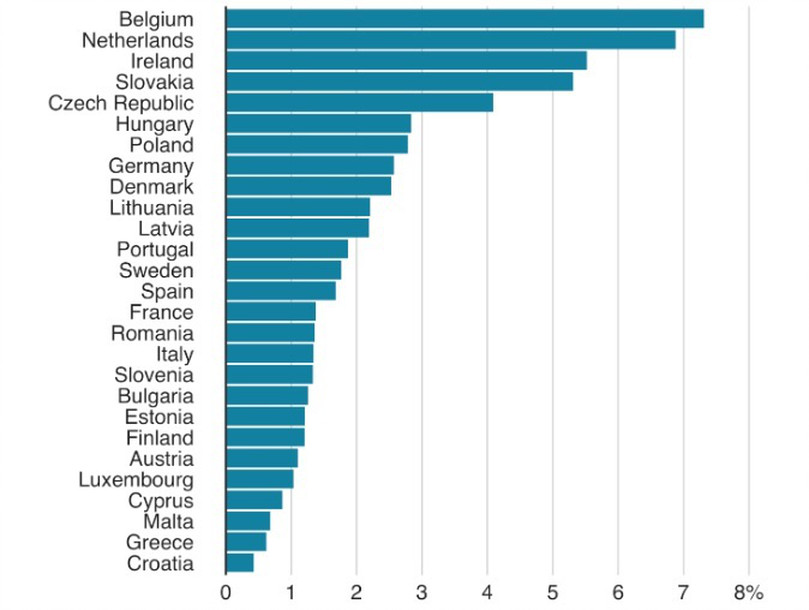 As the German GDP is 4.4x bigger than the Dutch one or 2.8x than Spain, exports of goods to the U.K. as a % of German GDP are obviously much smaller.

But by looking at these numbers, it looks like those 5 countries will be affected by any Brexit Outcome and exporters from those countries could be affected the most. 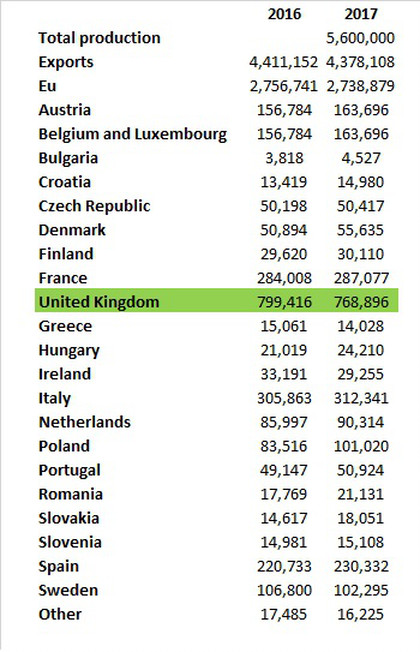 With 820k employees in the Automobile Industry in Germany in 2017, that means any big chances in tariffs could have a great impact on the German Auto industry.

So here we are not only talking about single auto manufacturers but as Germany as well. 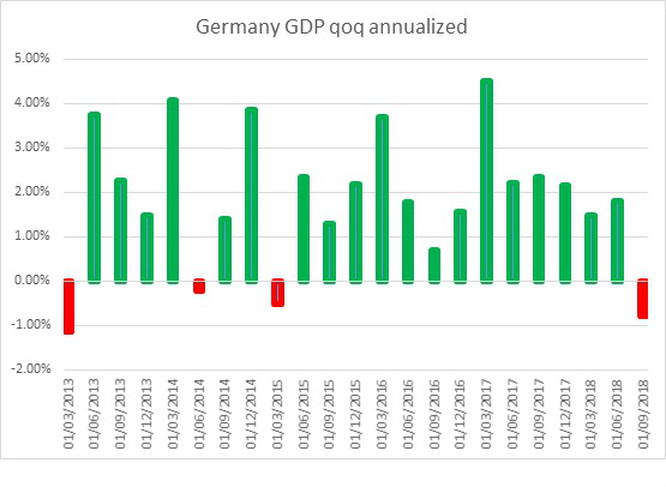 With Germany facing slowdown since the peak at the start of 2018, hard Brexit could accelerate the recession. Not only true for Germany but for a slowing Europe as well.

The big question is around the new tariffs:

Will they “follow” WTO tariffs? will the E.U. and the U.K. find bilateral agreements?

If we take WTO schedule, each member has a list of tariffs and quotas with their trading partners. At the moment, the average E.U. tariff averages 2.6%.

But some sectors might be facing different tariffs according to WTO rules:

– 10% for auto and auto parts => bearish Germany and France with names like BMW, Peugeot…

Hence, for stock idea generation, we first looked at the most impacted countries with possible new tariffs then we filtered down to sectors and industries => Easy names are auto manufacturers but they are obviously more.

For idea generation on U.K. stocks I like to use:

Since the Brexit vote, the FTSE 250 has first underperformed the FTSE 100 as international companies benefited from a falling GBP. But since then the gap has narrowed and is close to neutral. 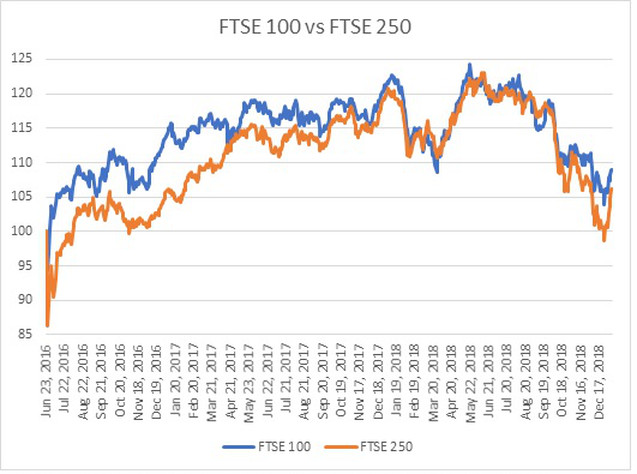 Based on your expectations on Brexit and GBP moves that can be a good pair trade.

Furthermore, I like to look at the different components of each index to determine the possible big movers.

CBOE UK Brexit High 50 = Comprised of the 50 companies in the Cboe 100 UK Index that derive the largest portions of their revenues from the UK. 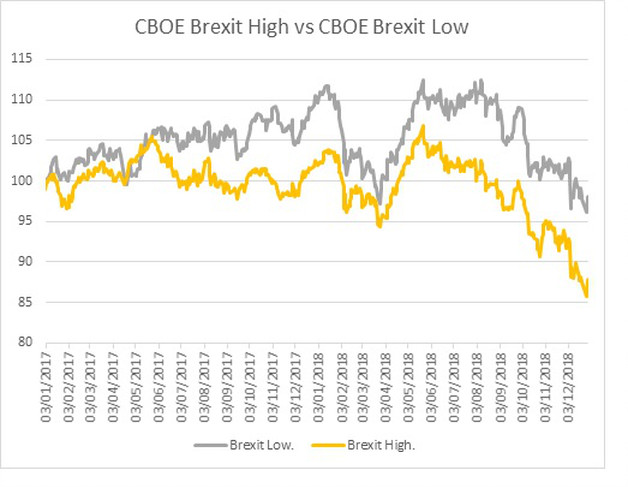 For U.S. idea generation, even if there are no changes expected for tariffs between the U.S. and the U.K., you might want to screen for U.S. companies with U.K. exposure. As always with U.S. data, it is much easier to find them than the ones for European companies.

Here is a small snapshot of those companies: 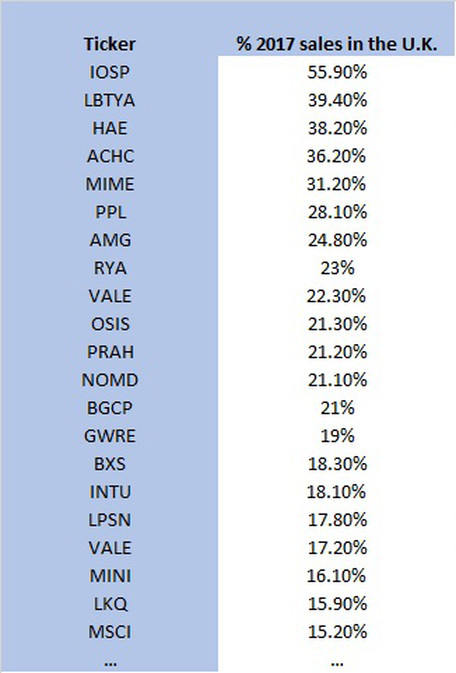