In 2018, Oil has been making the headlines from Trump pushing for lower prices, to Iran sanctions, or Saudi Arabia, or OPEC…

All eyes are now on the OPEC Meeting in Vienna on the 6th of December 2018.

Are they still credible? Would they cut production? And if they do, by how much?

As headlines, comments, tweets… reverse almost every day on Oil, I just wanted to get a better picture on what is happening. 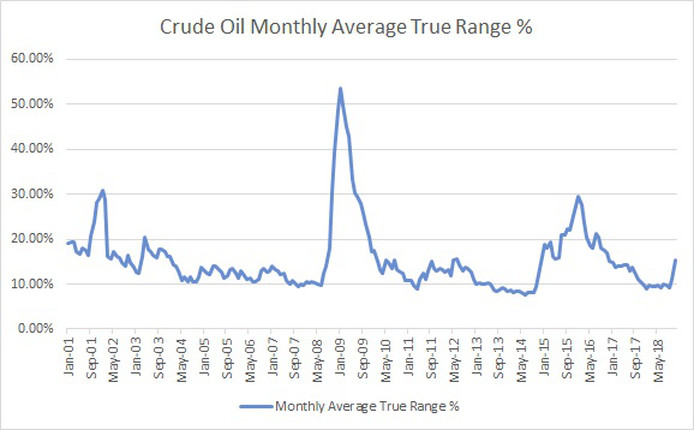 Is it the start of a bigger move?

Let’s now have a look at Oil Supply: 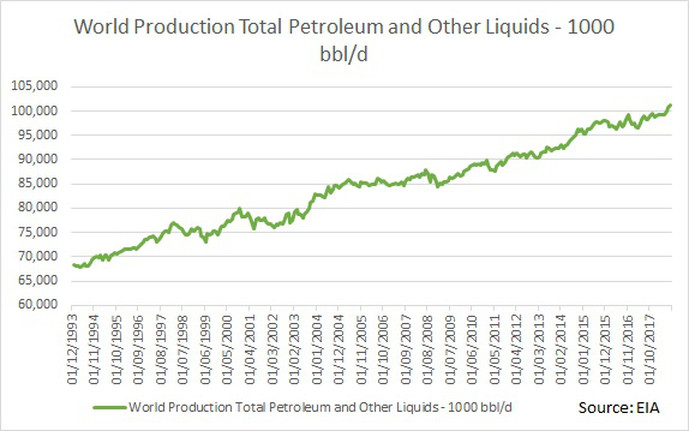 Steady it goes, year after year.

Despite many warnings (that started decades ago!!!) from oil producers or oil majors that we will be soon running out of oil reserves soon, there is still Petroleum and Production goes up.

What about U.S. production recently? 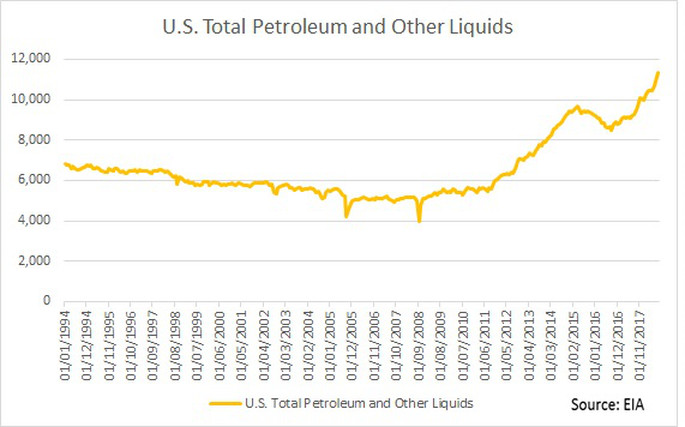 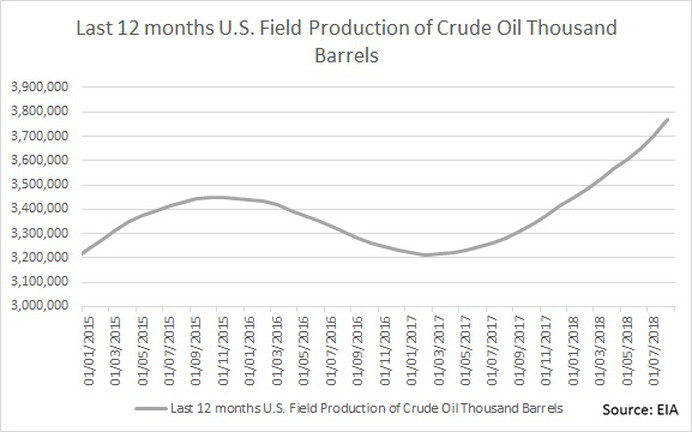 The 1rst graph (U.S. Total Petroleum and Other Liquids) shows a massive ramp up with almost 2m barrels more over the last 12 months for the U.S. only.

What about Saudi Arabia production? 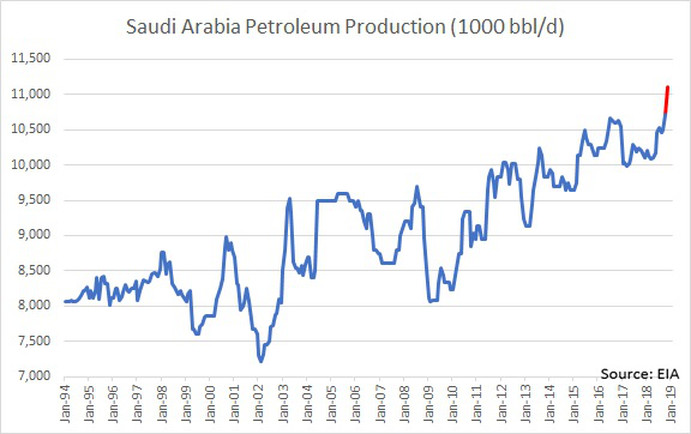 Same here with a massive recent ramp up from 10.5m barrels per day in September to 11.1-11.3m expected in November (change in red in the above graph) and 1m barrels increase over the last 12 months.

Here we are talking of an increase of roughly 3m barrels for the U.S. and Saudi Arabia combined in the last 12 months. Yes, 3 millions!

With oil stabilizing and staying above 50, more and more U.S. drillers were activating idle rigs. 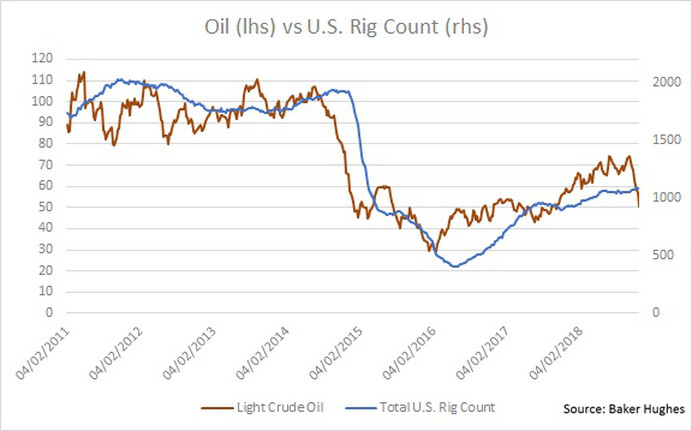 One of the narratives for higher oil was that Iran sanctions would drastically create an imbalance. So other OPEC members had to increase their productions to keep a balanced market. 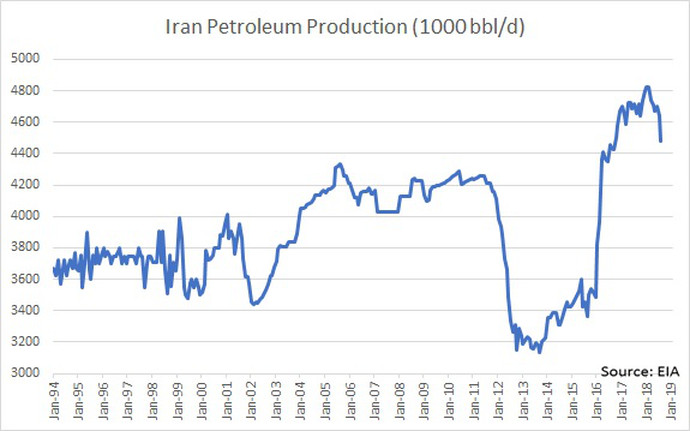 So far, Iran’s oil exports have been reduced by 800k-1m barrels per day and estimations are between 1m to 1.5m when the sanctions really kick in.

If we will only take the increase from the U.S. / Saudi Arabia vs the Iran decrease, we will end up with roughly 2m surplus in 2018:

I agree there are some shortcuts here but you have the big picture. Without any increase from any other OPEC member (like Russia), you have already a production increase of at least 1.5m barrels yoy.

What about the Oil Demand? 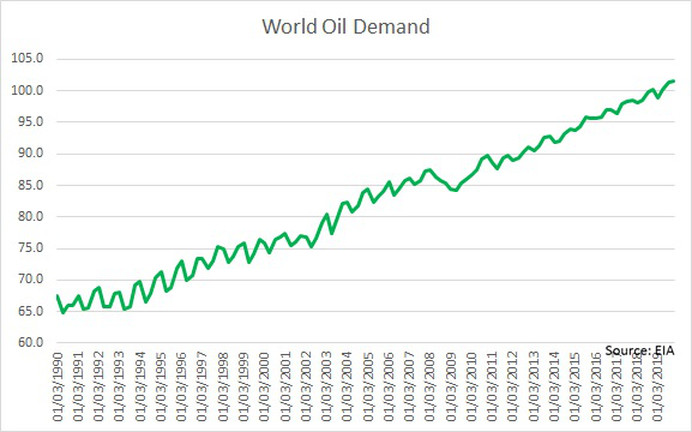 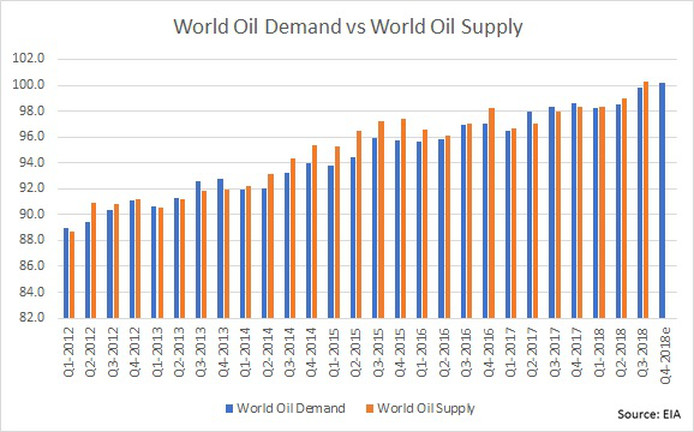 Graph for the U.S. Stocks confirming that 2017 saw a deficit: 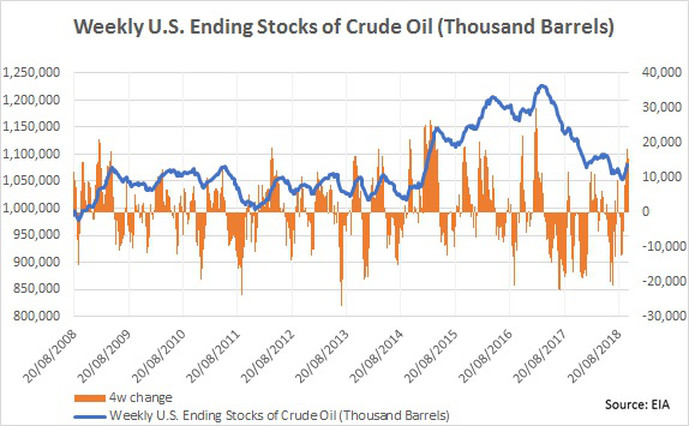 Therefore, the production increases from the U.S. and Saudi Arabia (roughly 3m yoy) are enough to balance the combination of world demand increase (1.5m to 2m) and Iran cuts (1m to 1.5m). Oil market is correctly supplied, with a small excess of roughly 500k barrels for each of the last 2 quarters.

On that basis, assuming that the oil market was balanced in early 2018 and looking at those demand-supply numbers, it is fair to say that oil should be at the same levels or a bit below. In December 2017, crude oil was trading between $55-60.

What about the market positioning?

From the Commitment of Traders report, Non Commercial Participants were aggressively long Crude oil at the start of 2018. Maximum positioning was recorded at the end of January 2018 after 12-18 months of increasing long positions. 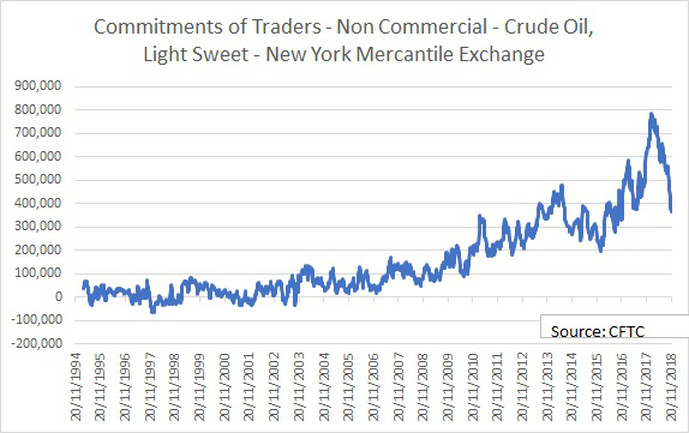 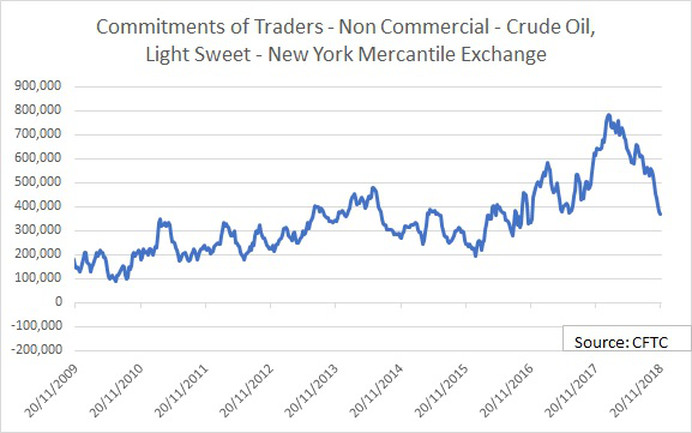 Non Commercial were very, very long. The unwinding of those extreme long positions (cf. recent move vs Nat Gas) was another factor in the recent move.

This is the recent correlation: 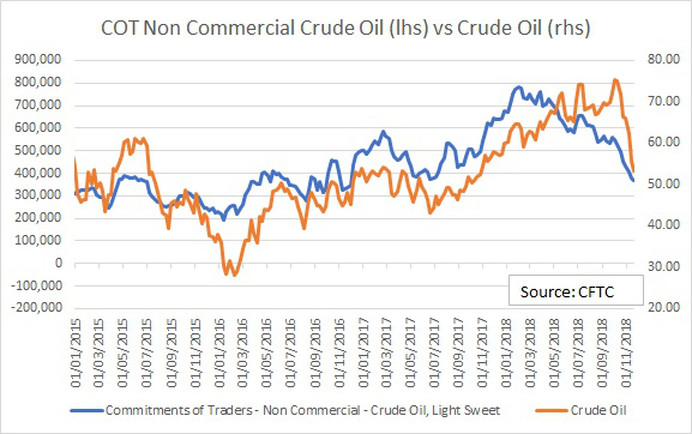 With around 1m barrels in excess for the 1rst 9months of 2018 and with Saudi Arabia still increasing production, we could see an excess production of 1.5m to 2m.

Any cut from OPEC will need to be of at least 1.5m for a market equilibrium.

Let’s quickly look at history on the demand side:

During 2007-2009, Oil demand experienced a maximum drawdown of 3.2m barrels. I like to take 2007-2009 numbers to gauge what could happen when everything went very wrong.

But any slowdown means probably a small increase or even a decrease.

That is to say that a quick equilibrium (6-12months) for the oil market assumes:

Time for you to align those demand-supply numbers with your own 2019 macro expectations.

40-60 is therefore a very important range for the Oil Industry. Any new oil drilling project takes between 3 and 18 months (deep offshore) before going on-line. The price stabilization we saw from mid-2016 onwards, then the rise in oil price brought new active projects down the line, i.e. from 2018. At these levels, many projects are off. $50 is a BIG level.

2014-2016 oil rout was not long ago, and many Oil Companies have stretched balance sheets. Recent moves in the stock market and in the junk bond market clearly show there is big risk below $50.

The same could be said on a country level like Saudi Arabia or Russia for example.